The Dashboard UI template node is used for mainly used for displaying data but it can also be used for data input.

The template widget can contain any valid html and Angular/Angular-Material directives.

If you aren’t familiar with angular then take a look at the w3 schools tutorial. 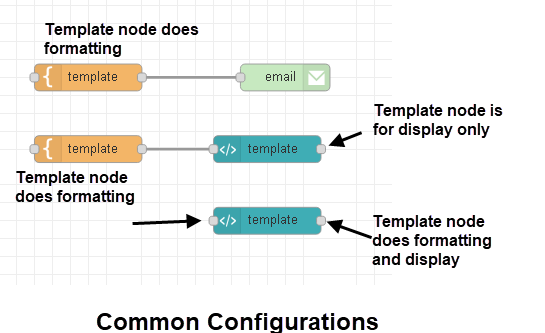 1. If you need to format the data .e.g. put into a table and don’t need to display the data then use the template node.

2. If you need to format the data .e.g. put into a table and also need to display the data then you can use the template node along with the template UI widget.

3. If you need to format the data .e.g. put into a table and also need to display the data then you can use the the template UI widget on its own.

The dashboard UI template node can be used to add custom styles to the node-red dashboard.

You need to configure the template type to Added to site <head> section as shown below: 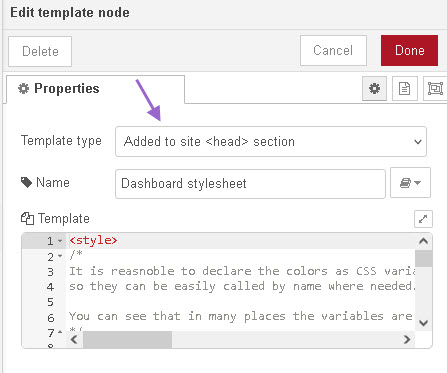 Place the node anywhere in the workspace and the styles will be available in all flows.

If you drag and drop the template node into the workspace and open it you will see the following: 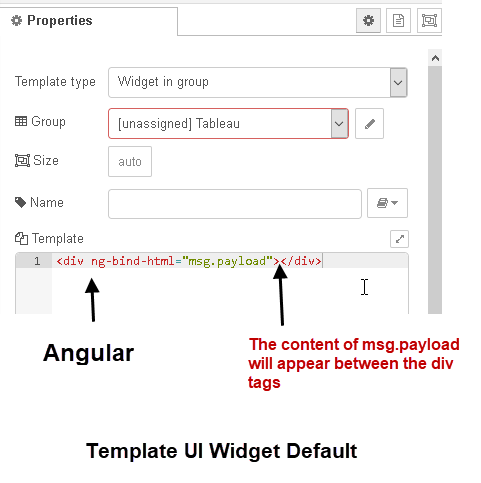 Note: The template type is set to Widgets in a group

If we used the inject node to inject the text “this is test” this is what we would see displayed.

Firstly I’m not a angular expert. I didn’t know what it was until I started using the template widget.

What I learned came from the w3 schools tutorials and hacking, and I still confess I find it confusing. However these notes will hopefully help you.

Angular uses what are called directives but they look like HTML attributes in that they go inside an HTML tag.

These directives start with the prefix ng-

So if we take the one shown earlier in the default template node we have.

So if our msg.payload contained an HTML table with data we would see the table displayed.

There is an alternative to using ng-bind directive and that is show below and is easier (IMO) to understand in uses the {{..}} format

The above does the same an says put the msg.payload here.

So the ng-bind and {{}} formats are used to display data, but how do we input data?

To input data we need a variable to hold the data and to use the ng-model directive. Here is an example.

The name variable defined by the ng-model directive holds the input data and we can use the ng-bind directive to display it as shown below: 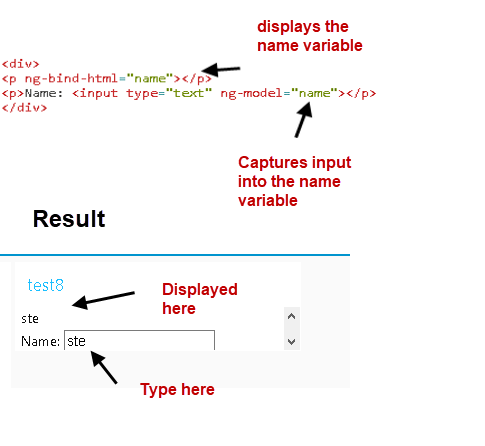 Using ng-repeat to loop Through an Array

If the payload contains array data you can use the angular ng-repeat command to loop through the array. If we take the data structure below which is an array with 2 objects:

If this is the payload sent into the template then we can loop through the array using:

and then through the objects using:

were payload is a variable name. Here is the actual code from the template node

This is what it produces:

Here is the flow for the above.

Because of the way the dashboard nodes are implemented you cannot create Apps or controllers.

Not dummy at all! What you need to understand is that Dashboard is wrapped around Angular in such a way that you don’t get access to everything in Anglular.

So there are some gotcha’s. The main one being that you don’t get full access to $scope. Also you cannot create your own app/controller.

The use of this node is much easier explained in videos