It has always been possible to store JSON Data in an SQLite database as JSON  data is simply text data.

However what was not previously possible was to query this JSON data.

This changed in version 3.9 in 2015 (SQLite history)and so there is no need to separate out the JSON data so that you can query using a key. .

As an example let us take a JavaScript object

To store this in SQLite you simple convert to JSON and store as text.

However prior to version 3.9 it wasn’t possible to query the database using the temperature,time or humidity keys as they are part of the JSON data.

To accomplish this you would need to extract the key from the JSON data and create a database key for this.

The best way to see this is via an example and so we will create two flows using database tables that use these two methods.

For our flows we are going to be storing temperature and humidity data for a group of sensors (sensor1,sensor2 etc).

We will be recording

If we needed to query the database on all of these fields the we would create a database scheme with the following fields:

Note the time stamp is an integer as we are using a Unix like time stamp.

Where Data contains our time stamp,temperature and humidity stored in JSON.

We are going to call our tables sensor_data1 and sensor data_2 and use the database called test.db

Our command to create sensor_data1 is

Now although the above works well and it is relatively easy to create queries for any of the fields it isn’t flexible as what happens if I need suddenly to record the atmospheric pressure?

The answer is that we need to add another field to the table which is possible but not simple.

To create our table we use:

This time our data is simply a JSON object with time stamp,temperature and humidityr.

We can easily expand it without having to modify the table.

The screen shot below illustrate this and the first entries were created without a timestamp and then I added a timestamp to the JSON data. 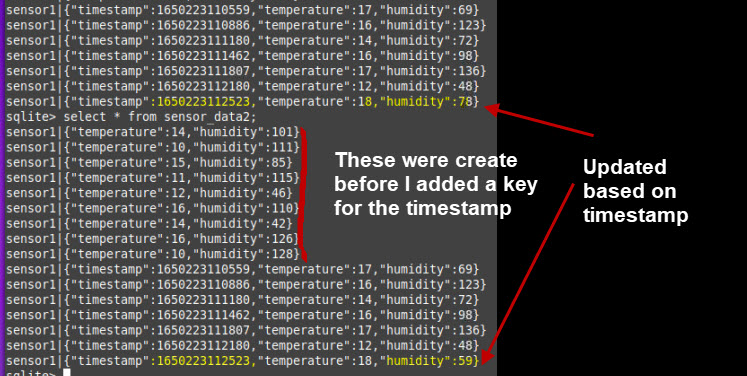 The screen shot above also illustrates how we can modify a JSON key value . I created a query to change the humidity value based on the timestamp.

Here is the actual code taken from the flow.

Working with the JSON Data

The documentation lists all of the JSON functions that are available.

My example flow illustrates two of them :

If you refer to the code above

The actual JSON key is referenced as $.keyname ($.humidity) and is in quotes.

For the timestamp we use the JSON extract json_extract(sensor_data2.data,’$.timestamp’)

This time we have $.timestamp.

When it comes to storing time series data Influxdb seems to be the main choice.

Influxdb is very powerful, but not so easy to use as SQLite, and is I feel an overkill for small data volumes on devices like edge nodes and home networks.

We simply create a database table with the following fields:

The timestamp field contains the current time and the data field our JSON data.

Resources and references and Tutorials