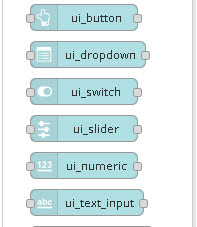 You can create node-red dashboards for IOT and Home automation and for a myriad of other applications.

However the nodes that allow you to do this aren’t part of the core nodes and need to be installed separately.

More details are available here if needed. If you are a developer the latest version of the dashboard node provides an api for creating your own dashboard widgets. details are here.

The node-red-dashboard node installs a collection of nodes under the dashboard category.

You can view dashboards using the same url as node-red admin but with /ui added e.g http://localhost:1800/ui.

The path can be changed in the settings.js file

The easiest way to become familiar with the various dashboard widgets is to create a dashboard using them. This video shows you how to create a basic dashboard.

Here is the flow used in the video

The dashboard layout should be considered as a grid.

The basic element is a widget which are placed in groups.

Widgets also have a width which by default is set to auto which means that it will be the width of the group.

The layout algorithm of the dashboard always tries to place items as high and to the left as they can within their container – this applies to how groups are positioned on the page, as well as how widgets are positioned in a group.

Given a group with width 6, if you add six widgets, each with a width of 2, then they will be laid out in two rows – three widgets in each.

If you add two groups of width 6, as long as your browser window is wide enough, they will sit alongside each other. If you shrink the browser, at some point the second group will shift to be below the first, in a column.

It is advisable to use multiple groups if possible, rather than one big group, so that the page can dynamically resize on smaller screens.

If you change the width of a group then you will see that it has a maximum size. This is effectively the size of the display page.

The dashboard is filled horizontally so if the max size is 27 and you create two groups each 10 wide then they will it side by side as shown below:

If you add a third group then it will be placed below as shown below:

If you look at the screen shot then you can see spaces between groups and widgets the actual space is set on dashboard>site tab.

When adding widgets to a group then the size is set to auto by default which means it will fill the width of the group.

However you can change both the vertical and horizontal size. If I place three text widget in group1 and set the size of each to 4 *3

Now notice how they fit into the group which is 10 units wide. Also notice the widget spacing and how the groups are now positioned on the page.

Note: Changing the zoom settings on the browser as well as changing the browser window size will affect the display. In addition the screen size of the device you are using will also have an impact so you should test on a variety of devices.

There are three options – light,dark,and custom, and this is set on the dashboard>theme tab 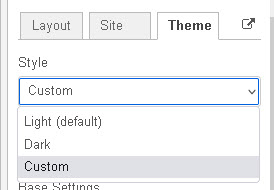 This is done using a template node with the template type set to added to site <head> section. 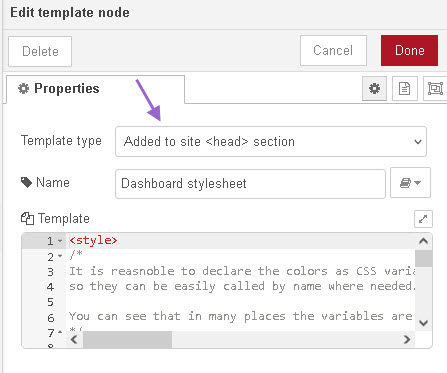 The styles defined in this node will be available in all flows.

The following screen shot show use of the template style to create a dashboard. 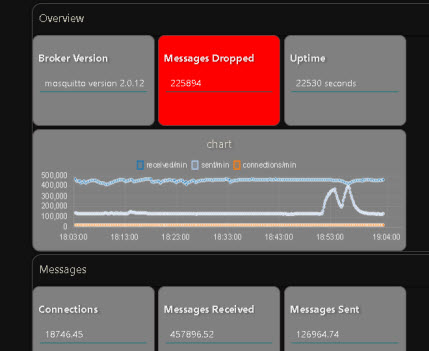 The actual style I got form a forum post here the author was hotNipi and I found lots of useful information there. I have included the template as a download in case you can’t find it on the forum.

If the widget has a class property as shown in the screenshot below.

The you need to create the class using the template node and add the class name to the property as shown above. Here is the code for the class.

Here is an example flow that consists of an inject node that send a simple text string and a change node to set payload properties for the colours.

The change node is shown below 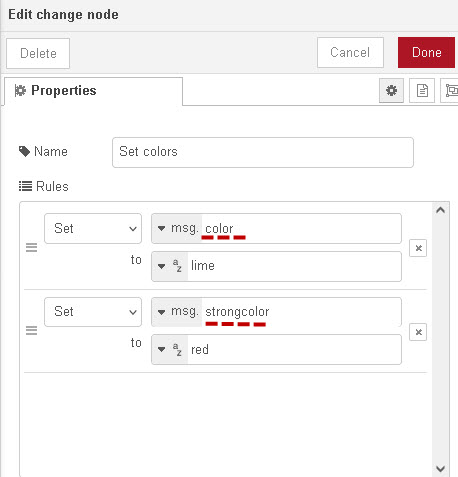 The work is done the text node where HTML is used to change the font colour which is passed into the node as variables from the change node. 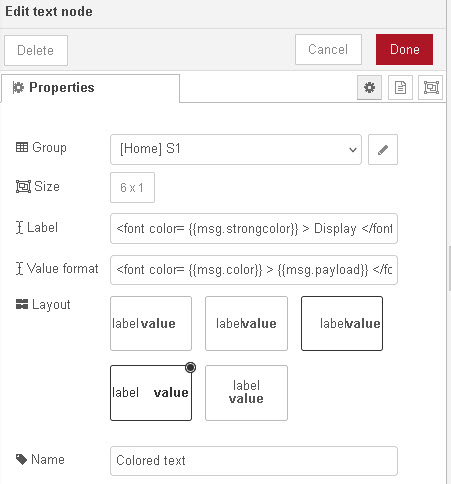