On Linux the settings.js file is copied from the /usr/lib/node-modules/node-red/ folder to your .node-red folder in your home directory when you start node-red, and there is no settings.js file present.

On windows if no settings.js file is present in the home folder then the node-red start process stops with an error.

The default settings.js file is mostly commented out.

In node-red version 2 a new command was introduced that helped you create a basic settings file by following simple on screen dialogue.

and is described in more detail here

Important Note: The settings.js file is a JavaScript object so pay attention to the commas at the end of the lines

You can change this in the settings file by un commenting and editing the line:

Alternative port – Edit this line and change 1880 to the required port number.

uncomment and edit the line:

uncomment and edit the line httpStatic as shown below:

For example, If you need to use an node module e.g the os or fs module then you need to enable them under the functionGlobalContext: object as shown in the screen shot below: 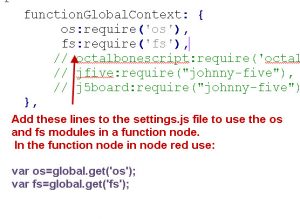 To use them in the function node they are part of the global object so use:
var os=global.get(‘os’);
var fs=global.get(‘fs’);

Although you can change the node-red port and flow file using the settings file you may prefer to use a command line switch instead.

Will start node-red using the settings.js file but on port 1888

Will start node-red using the settings.js file but use the myflowfile.json file to store the flows.